Almost three years ago, NVC played a supporting role in a project funded by the Asian Development Bank and spearheaded by AGAPP Foundation. NVC implemented a 200-day feeding program using Mingo Meals in 45 preschools around Negros Island and Bicol. It was part of a much larger project designed to enhance access to quality early childhood education services for children in poor communities of the Philippines. The feeding program was simultaneously launched on on August 12, 2014, with 3,852 children taking part.

The multi-million dollar education project was implemented by AGAPP Foundation in cooperation with the Department of Education and partially funded by the Japan Fund for Poverty Reduction (JFPR). NVC and Pinoy Power Bicol Foundation Inc., were tapped as local NGO partners in Negros Island and Bicol, respectively. The overall project, which was considered successful, involved the construction of 60 preschool buildings, teacher training, feeding of schoolchildren, and other components.

ADB found the performance of NVC and Pinoy Power Bicol, its local partner NGOs, to be “highly satisfactory” (the highest rating ADB gives), and gave the same high rating to the Mingo feeding program. It also said that “the partnerships formed between the schools and communities, local NGOs and LGUs in the areas of school health and nutrition, livelihood programs, and parent education proved to be a main driver of success.”

ADB reported that that among malnourished children who were given Mingo for 200 days, more than 16% significantly improved. In schools not given Mingo, the success rate was only half; malnutrition fell by only 8%. It also described Mingo as tasting good, which made kids happy to eat it.

Thanks to project cost savings and due to the initial success of the feeding program, a second batch of kinder students was also given Mingo. Almost 7,300 students benefited from Mingo throughout the project.

The ADB project was completed in May 2016.

In June 2017, ADB published its implementation completion memorandum, which evaluates the success of the project. ADB’s report describes the Mingo Meals feeding program as:

School feeding program. The project implemented a supplemental feeding program across all JFPR funded schools beginning in July 2014 (the start of year 3). The implementation plan was based on a 200-day supplemental feeding program for kindergarten pupils aged 5-6 years old, designed by the local NGO consultant in Negros, Negrense Volunteers for Change (NVC) using Mingo, a locally-produced powdered food supplement made of rice, mongo and malunggay. Produced by the social enterprise arm of NVC, Mingo is rich in protein and contains Vitamins A, C, B1, B6, Potassium, Iron, Calcium and Zinc. Importantly, it also tastes good and comes in multiple flavors, so children are happy to eat it. Because of savings in other components, and positive results observed during field visits, ADB approved a reallocation of unutilized grant funds to conduct three more months of the feeding program to benefit a new batch of kindergarten students in project schools. Feeding accounted for 16% of utilized grant proceeds, benefitting close to 7,300 students.

The report goes on to give a “highly satisfactory” rating to local NGO partners, calling the partnership a “key aspect” and a “highly effective model of community empowerment.”

Performance of partner NGOs was highly satisfactory. A key aspect of the grant’s effective implementation was the role of the local NGO partnerships with Negrense Volunteers for Change (in Negros), and Pinoy Power Bicol Coalition, Inc. (in Bicol). With offices and operations located in the regions where the JFPR beneficiary schools and communities were located, these NGOs served as local implementing agencies, providing support, supervision and monitoring at all stages of grant implementation. Crucial to their role was the ability to mobilize and engage communities—an activity central to their own missions. The partnership with local NGOs proved to be a highly effective model of community empowerment.

And how did Mingo perform?

School feeding. The school feeding component was highly successful, reaching 7,294 children in all 45 JFPR-financed schools. The Mingo supplement (provided through partnership with a social enterprise) was appropriate as it is nutritious and easy to prepare as a porridge. Perhaps most importantly it tastes good, so kids are happy to eat it, which is crucial for the success of any supplemental feeding program. Field visits confirmed that mothers volunteered their time and effort in helping to prepare and supervise the feeding. The project impact assessment found a significant improvement in children’s level of malnutrition after implementation of the supplementary feeding program. The proportion of wasted or severely wasted children in project schools fell by 16.5 percentage points. In comparison, the proportion of wasted or severely wasted children in control schools fell by 8.05 percentage points. 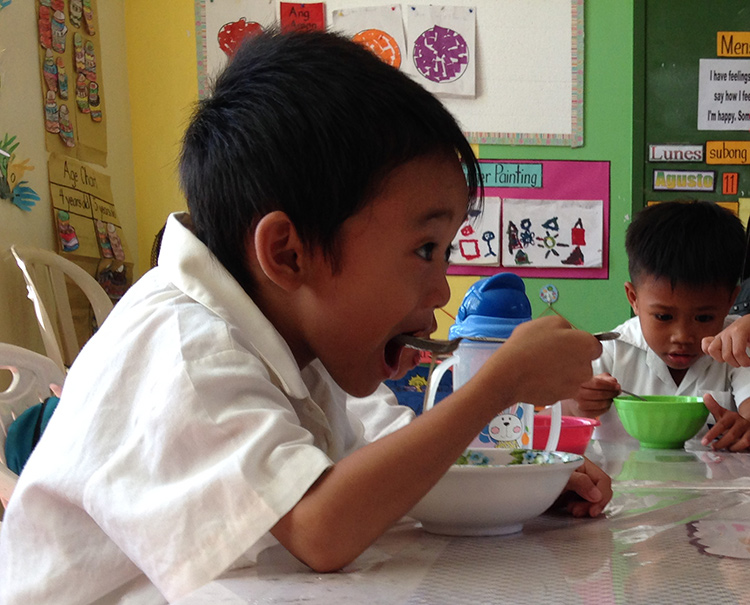 ADB, based in Manila, is dedicated to reducing poverty in Asia and the Pacific through inclusive economic growth, environmentally sustainable growth, and regional integration. In 2016, ADB assistance totaled $31.7 billion.

Many thanks, ADB and AGAPP, for trusting your feeding program to us and for confirming its effectiveness in reducing malnutrition among Filipino children!