Manila Bulletin: When Someone Decides to Pay It Forward

Acts of kindness should always make it to the news especially if it comes from people who do not have much to share.

One of them comes from a woman named Carol, from Bacolod City, who gathers food scraps to feed her pigs, who are not actually hers but are owned by neighbors.  She earns from her share of the profit after the pigs are fattened and sold.

Six months ago, Carol would go to the usual houses to collect food scraps with an old pedicab whose usefulness had been severely limited by age.  The seat had collapsed and the alignment of the tires had made the pedicab only good to use as a carriage for its load.

So Carol would pull the pedicab around a neighborhood every day just after high noon when families have finished their lunch. She said that’s the perfect time to catch the food scraps before they are dumped into the garbage.

Six months ago, Carol’s situation changed because a donor had asked Negrense Volunteers for Change Foundation (NVC) for a list of 10 people who may need pedicabs. Carol’s name was on that list.

The new pedicab was a welcome productivity tool for Carol’s livelihood. It allowed her to pedal to more houses and go home with more food scraps for the pigs she was raising.

Last week, she asked for the address of NVC. Carol wanted to pay it forward by giving part of her profit from the pigs that were going to be sold soon. 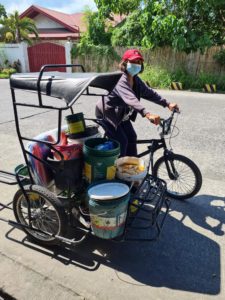 We learned that she had scheduled a visit to the NVC office to give her donation to a fund to provide a livelihood tool to another person. Another stranger will soon increase his or her earnings to buy more food for the family.

All because someone decided to pay it forward.

For those who are not yet familiar with the term “pay it forward,” it is a term popularized by a 2000 film, which means “responding to a person’s kindness by being kind to someone else.”

The act to pay it forward creates a ripple effect. It sets off a wave of kindness that always improves the situation of another stranger.

NVC Foundation has witnessed many acts of kindness inspired by the pay it forward gesture. A very recent one came from a Filipino woman in Nevada who had recently opened a bakery there.  After hurdling many challenges in her life, she wanted to give an opportunity to a struggling baker in her hometown by donating equipment and supplies.

The woman who runs a bakery in Nevada, USA, contacted NVC for someone whose life can be better through baking. Through NVC, the anonymous donor funded the upgrade of the kitchen of a woman named Teresa, in Bacolod City.

Teresa had been baking pizza, bibingka, cassava cake and macaroons in a makeshift oven in a space where the family also eats and sleeps.  Her oven was an aluminum pan on a stove top covered by a wash pan. She kneaded the dough on top of a plastic sheet on a small table that functions as the dining,  study, and kitchen table.

Yet with her limited resources, she was able to send her children to school with the money she made from those pastries.

Her livelihood will now improve after the baker in Nevada sent funds to upgrade Teresa’s kitchen and baking tools.  Today Teresa has a  fully screened kitchen, a new oven, various baking tools, and enough ingredients to start her business.

Incidentally, Teresa’s new kitchen was “inaugurated” just in time for the feast of St. Honoré, the patron of bakers, on May 16.

We learned that Teresa has informed NVC that she will set aside part of her profits to spread the kindness shown to her by a complete stranger who wants to remain anonymous. Soon, Teresa said she will pay it forward.

Two years ago, a group of nine tricycle drivers set aside some of their earnings for 18 months to fund the purchase of a new tricycle.  That was donated to a man whose earnings were substantially reduced because he had to pay rental on the tricycle he drove, since he did not have one of his own.

It is very heart warming to read about the spread of kind acts in the midst of the pandemic, especially from people who do not have much to share.

NVC Foundation, established in 2010, is now famous for its Mingo Meals, the high-nutrient complementary food that are not only for malnourished children but are now distributed in evacuation centers for people displaced by floods, typhoon, volcanic eruptions and war. The foundation is also known for linking donors to beneficiaries, the most well-known of which is its Peter Project which gave over 5,000 motorized boats to fishermen who lost their boats to typhoons and other natural disasters. (NVC can be reached through [email protected])

If you have been blessed with opportunities, perhaps it is time to pay it forward.

Read about Teresa whose kitchen got a makeover.